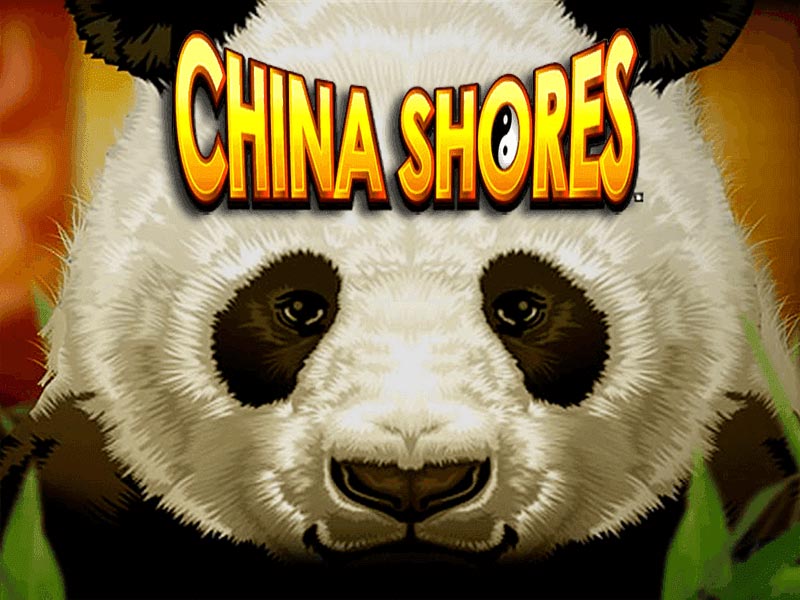 I confirm, that I am over 21
23 players already played

Whisk yourself away to a magical land in China, where giant pandas roam an enchanted bamboo forest full of secret treasures! China Shores from Konami is a tribute to the majesty of the Orient that could pave the way to a legendary untold fortune!

If such a place existed, few people would pass up a vacation in the Orient and live in a magical forest full of enchanted animals, ancient artifacts, and breathtaking vistas. Until this Shangri-La manifests somewhere on Earth, playing the real money or free slots version of China Shores from Konami will have to suffice.

China Shores is a relative newcomer in the online gaming world, so we packed our virtual bags and sailed off into the horizon to explore one of Konami’s latest offerings.

How to Play Chine Shores Slot – Rules, Features, and Payouts

The design behind this game screams an homage to ancient China’s rich history and beauty. The main “character” of China Shores is a Panda, who also serves as the icon for the game’s wild card feature. More on that later. The Panda’s bamboo forest is the game’s backdrop, creating an atmosphere of elegance and tranquility.

China Shores boasts five reels and 30 fixed pay lines, creating a frenzy of action. The minimum denomination is one cent per credit, and the maximum is fifty cents. The game gives you the option to bet up to five credits per pay line, which, multiplied by 30, can add up quickly. The reels read left to right for payouts and only occur when three or more symbols appear in a row. As the size of the combos increase, so do the payouts. 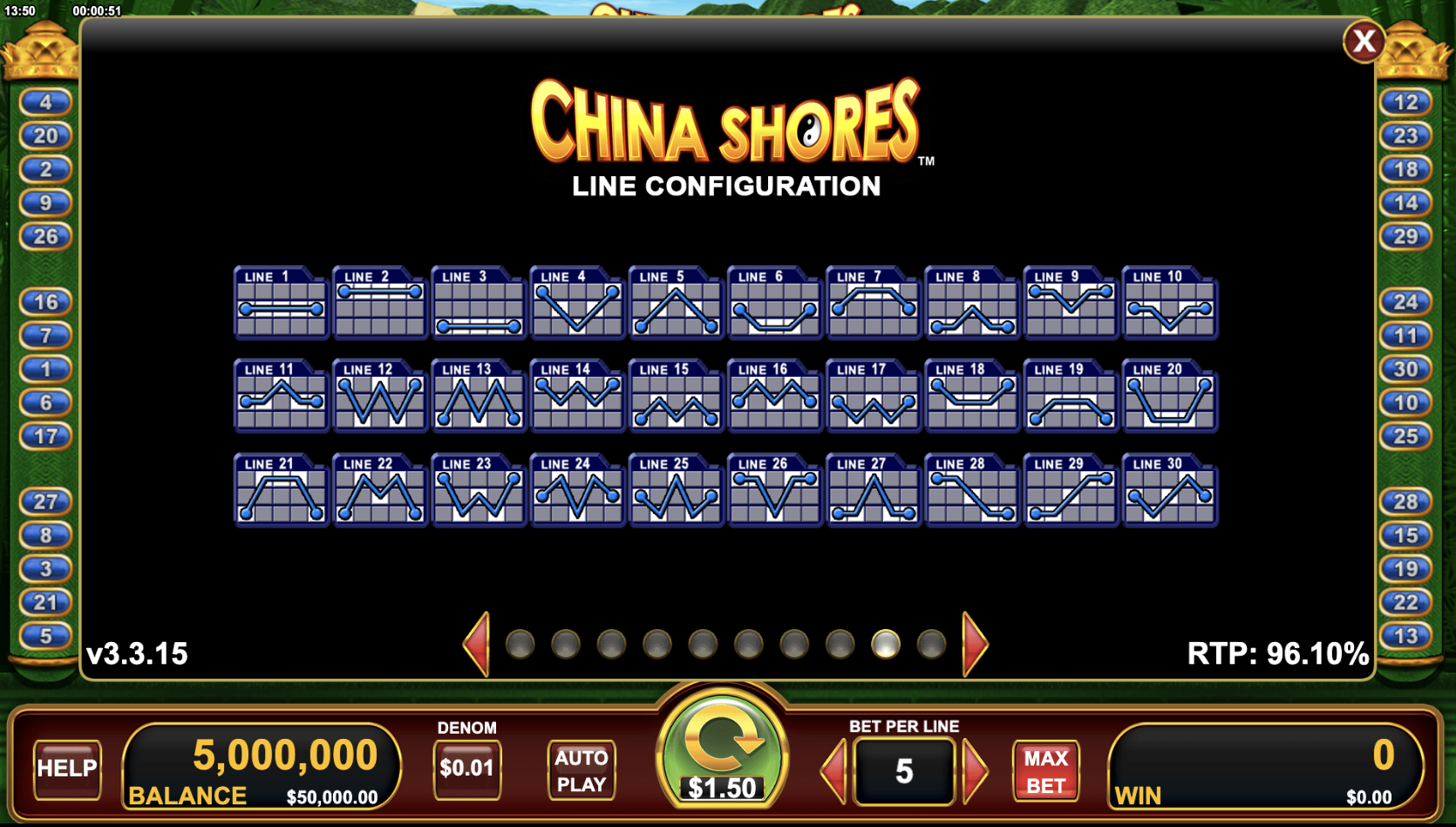 Play begins at the click of the “Spin” button or by hitting the space bar. From there, the high-flying acrobatics of the China Shores gameplay incites a hurricane of numbers, letters, and ancient Oriental iconography spinning round and round before your eyes.

China Shores is anything but short on game icons, sporting twelve in total. Card game staples like 9, 10, J, Q, K & A are represented here, along with icons inspired by the rich and ancient history of the Orient. The main character is a Panda, the “wild card.” Their bamboo forest habitat is the game’s setting. Other symbols include a Lantern, a Turtle, a Mark (which looks like a MahJong tile), a Pot, and a Ball that might initiate the bonus game when placed correctly in the reels.

The China Shores icons are weighted, with the “9” being the lowest and the Ball at the high end. If three icons in a row appear, beginning with reel one, you will win. Across 30 fixed pay lines, it would be nearly impossible to tell what you won or when. Thankfully, the computer has that part covered, so sit back and wait for the pomp, circumstance, and payout to begin. Later in this review, I included a screenshot of China Shores that visually depicts the layout, so you can see how intricately Konami drew out the pay lines.

The wild card game for China Shores is called Bonus of Fortune, and it was my favorite part of the game. The rest of the gameplay was fine, but my eyes lit up when I finally unlocked this feature. It was so exciting that I forgot I was in demo mode and convinced myself I had won real money. It took me a second before I gently burst my dream bubble.

When this game mode activated, it automatically gave me a series of free spins, after which I was awarded a bonus. This bonus can range from a few credits to a progressive jackpot’s worth. I was legitimately sad when the Bonus of Fortune mode in China Shores was over. I wish the rest of the game brought the heat the same way.

Want to know which slots have the best chances of winning? Check out our list of the highest RTP slot machines.

Our Impression of the China Shores Slot by Konami

Aesthetically, China Shores is beautiful. The attention to detail in the game’s design has a lot of thought and love behind it, even if it seems hectic. A lot is going on visually once the reels start spinning. Not long after the reels were rolling, my head was spinning too. 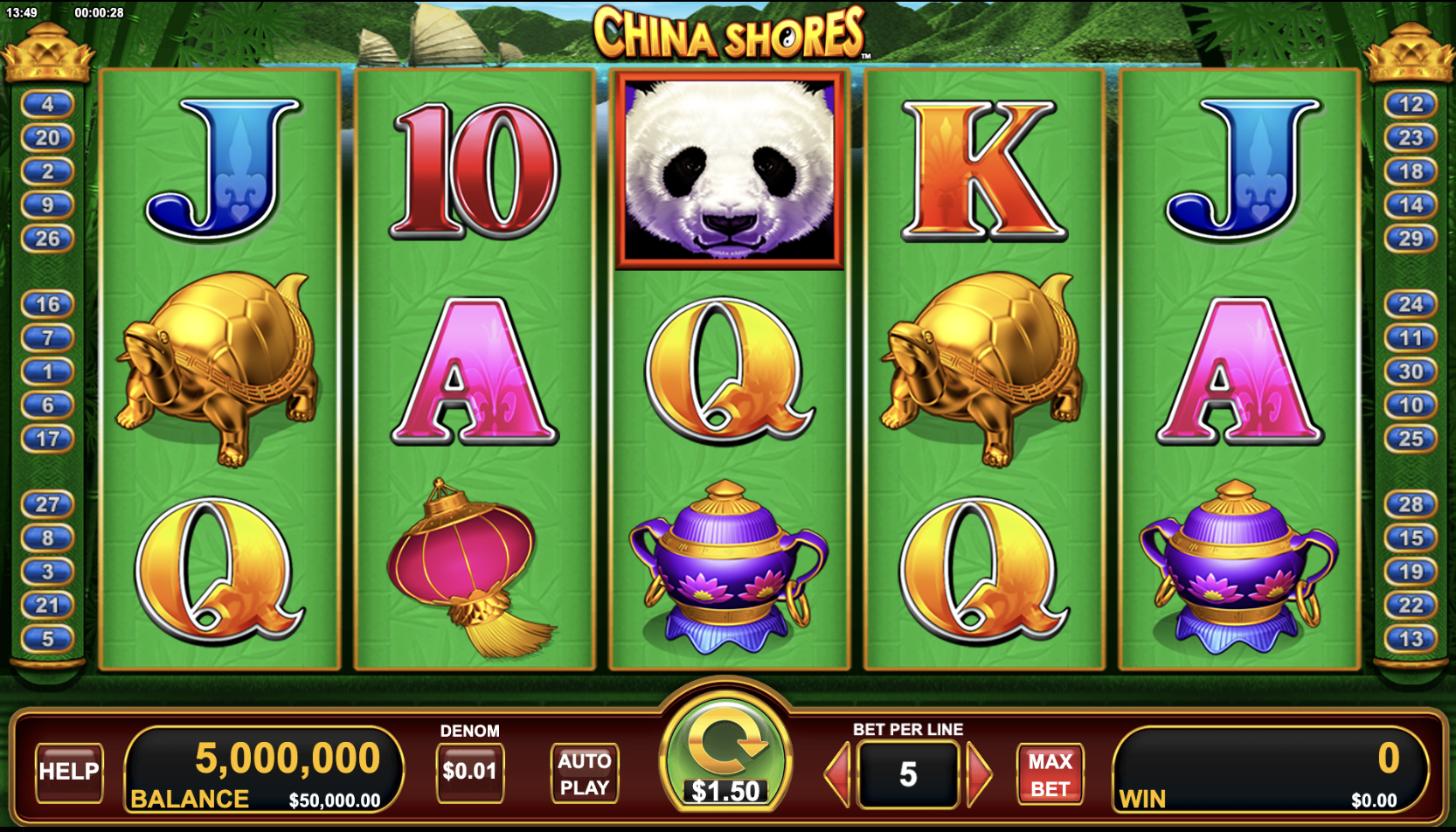 The absence of music in China Shores takes away from the beauty of the design and is exacerbated by a loud sound that blasts from your speakers when the Ball icon appears in a reel. It made me jump so many times that I eventually shut off my speakers. After an hour of play, I became frightened when the Ball icon appeared when I should’ve been stoked about a potential bonus game coming my way featuring extra payouts.

Further complicating this notion are the 30 fixed lines because they make it nearly impossible to tell if you won in China Shores. It’s fantastic that they give you so many lines per spin, but unless you’re planning to play for a while, I’m not so sure how many spins you’d get compared to a slot machine game with more adjustable variables.

The Golden Turtle of Truth

The Bonus of Fortune game mode in China Shores was the most fun and the only highlight of the gameplay. If you take away the Bonus of Fortune aspect, then China Shores is just another example of style over substance, one that left me wanting more. It’s a little strange when a game is so ho-hum that you don’t feel excitement when you win or could tell if you won with the sound off. For players that prefer a gaming experience as tranquil as the design, you may be in good fortune. However, in the end, when it comes to this game, I’m not so China sure.

Here are three Konami casinos offering China Shores on their site. Those casinos are BetMGM, Golden Nugget, and BetRivers, the latter of which is the only casino with a mobile app exclusive to Android.

You may only find a few other Konami casino games wherever you play. For example, on the BetMGM site, they have subheadings for many other developers, excluding Konami. The good news is that the casinos mentioned above routinely have bonus offers for new players. So, keep an eye out for these offers, and always remember to read the terms and conditions before depositing with one. Konami is an OG of the gaming world, so be on the lookout for more of their offerings besides China Shores.