I confirm, that I am over 21
1 players already played

Put on your astronaut’s suit and blast off towards a galaxy full of jackpots, where the stars shine brightly, and the cosmos is full of wonders! Starburst from NetEnt launches you into a universe of fun and excitement, where anything is possible when the stars align! 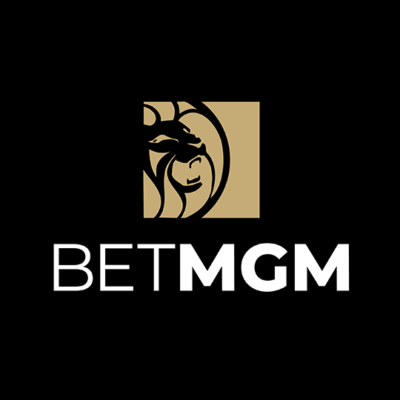 Full T&Cs Apply. New players only. To be eligible players must be 21 years or older and playing within the state of Michigan. $10 minimum deposit required. Players must wager the bonus amount 15x on all games.

Starburst by NetEnt is a celebrity of online slots almost as famous as its confectionary counterpart. Online slots come in many flavors, but Starburst has tickled the palettes of players since it hit the casino scene back in 2012, becoming one of NetEnt’s “superstars.”

For those of us who haven’t embarked on a mission in Starburst before, let’s fire up our spaceship and take a tour of the galaxy, hoping to find signs of online slot life. So, fellow astronauts, strap in and enjoy the ride as we break down NetEnt’s Starburst!

How to Play the Starburst Slot–Rules, Features and Payouts

Even after a decade of release, stepping into Starburst’s cockpit still brings a lot of flash and panache. Somewhat of an online slot classic, the game features a colorful array of sights and sounds that may seem intimidating at first but ultimately give way to a potentially exciting experience. Before you blast off, here are a few important notes from the Starburst mission brief.

One of the likely reasons Starburst has reached popularity is its simplicity. After the game initializes, it doesn’t take much more than a little common sense to figure out how to play. Starburst is colorful, has a pleasant soundtrack, and the in-game effects are exciting for this space-themed gaming adventure. 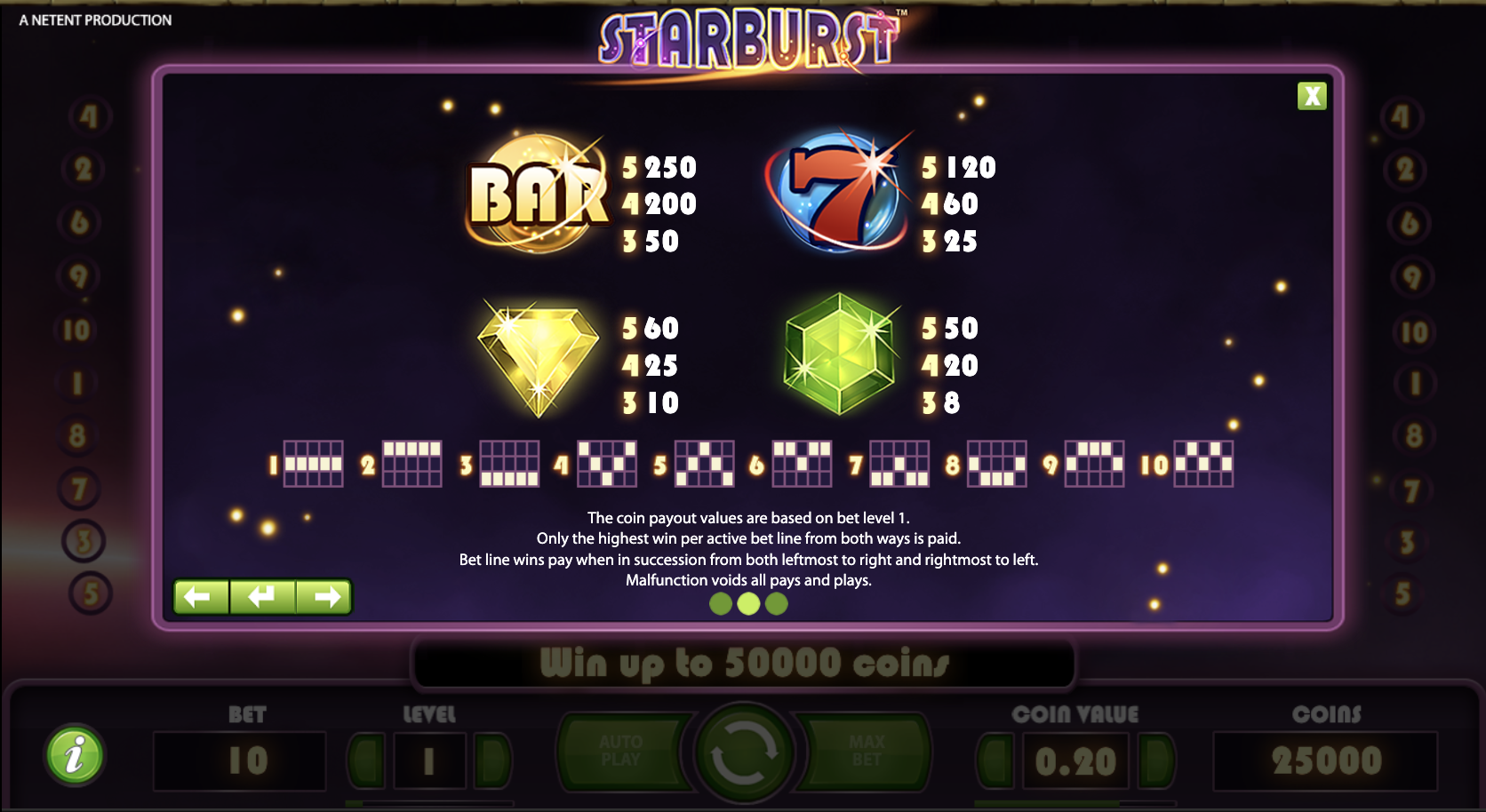 The game is comprised of 5 reels with three matching symbols. Starburst has up to 10 lines available for wagers, which game developers refer to as “levels” here. A player can wager in increments beginning with a minimum of one cent and a maximum of two dollars per line. Adjusting the increments and “levels” is as easy as hitting a little green rectangle that sandwiches the numeric amount. Once you’re comfortable with the Starburst play settings, the fun begins with the push of a button or your space bar.

As you probably guessed, stars play a pivotal role in Starburst, with five colors shaped like precious gemstones in varying geometric shapes. Accompanying the stars are three other symbols: a megastar wild card that looks like a less intimidating version of the Infinity Gauntlet and two very recognizable mainstays of slot machine lore, “Lucky 7” and “Bar.”

When three or more of these symbols line up in order from left to right, this is called a “combo,” and you will win. The red, blue, yellow, purple, and green-colored stars have values ranging from 20 to 80 credits, and more “levels” played equates to a higher payout. The Starburst “combos” payout will increase exponentially if you string four or five stars together.

The most remarkable feature of Starburst is what happens when one of the megastars appears in reels 2 through 4; it acts as a wild card that pays out on the initial spin then activates a bonus spin on the other four reels. So, the opportunity for a double payout is probably in the cards. It happened pretty often in demo mode for me, and I’d be lying if it didn’t hype me up every time it happened.

I’m not one to tolerate loud noises, and this game, although noisy, was not triggering. The only downside is that it’s the only bonus feature of the game, which explains its prevalence during my gameplay experience. It’s also worth mentioning that Starburst lacks a progressive jackpot feature for players who prefer to wager on those types of slots.

Our Impression of the Starburst Slot by NetEnt

The gameplay on Starburst had zero lag on my computer. Whether you’re wagering at the minimum or maximum, the gameplay experience was no different. Yes, the payouts increased, and there were more sound effects, but that was it. Lasers fired across the screen rapidly, and I saw stars all over the place.

When you play all ten levels per spin, the potential for combo wins in Starburst goes up. This is when stars align in three or more reels, and the payout multiplies by the number of levels or lines wagered. You’ll see the word “combo” flash on every level that a consecutive series of stars show up. 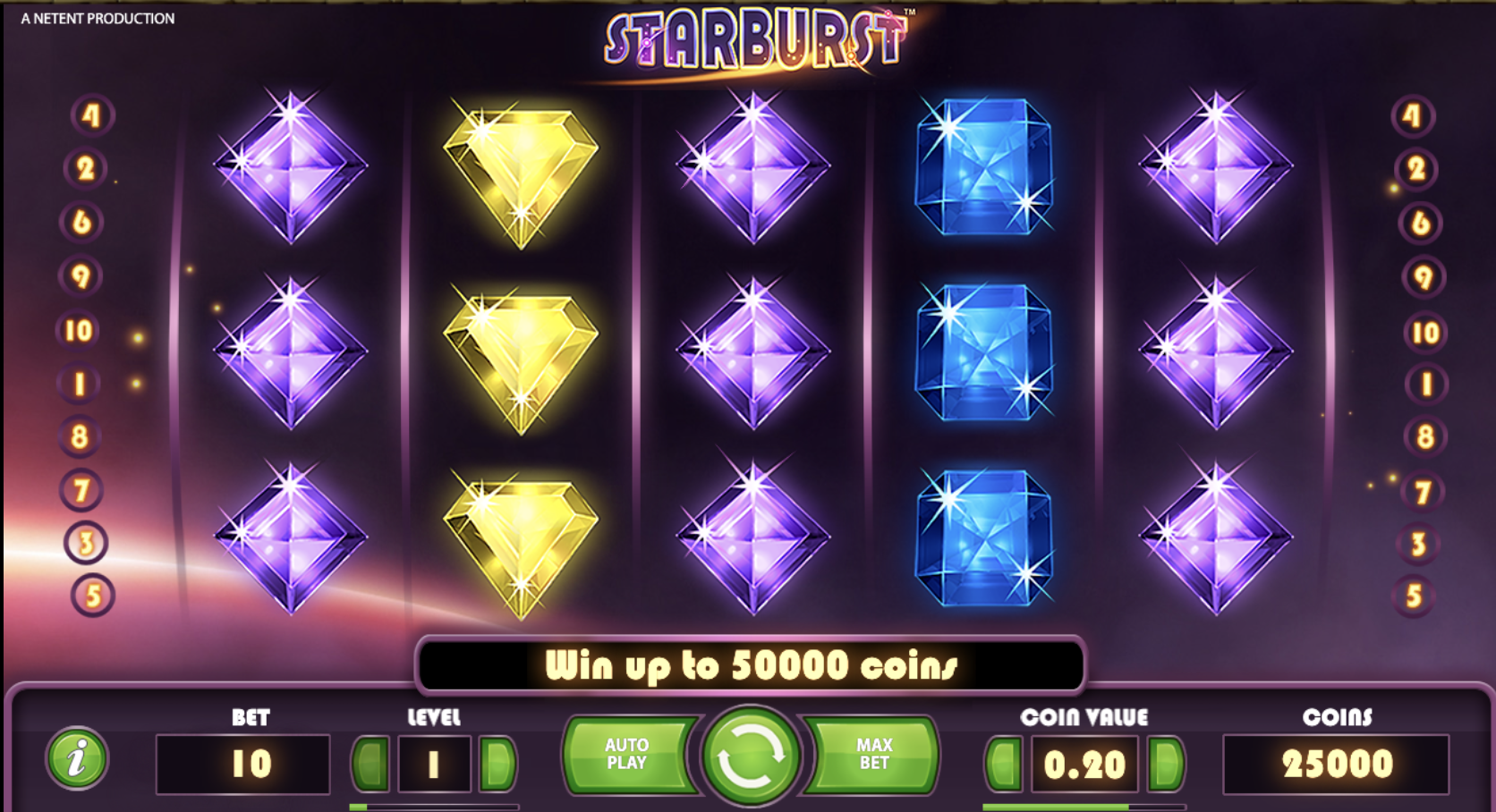 The payouts were the biggest bummer. It was a rare occasion when my winnings exceeded the wager, and that was a max bet at the highest level. Below that mark, I watched my “bankroll” drain fast. I enjoyed losing, but I might feel differently if the stakes were real.

The megastar wildcard feature in Starburst was the coolest of all game modes, and I was giddy at least once when it happened. Nothing is cooler to me than seeing “BIG WIN!” plastered in iridescent colors on my screen, but it only occurred once over an hour-long session.

It’s hardly a secret that I had fun playing Starburst. It was easy to see why word of mouth was strong in no time at all. Starburst’s long tenure dates to the dawn of modern online gaming, and for NetEnt, this is one of their biggest developmental successes. It was fast-paced and held my attention longer than many online slots out there. For me, though, the fact that my “bankroll” disappeared faster than debris entering earth’s atmosphere on reentry makes this a game I turn to for a jolt of adrenaline in demo mode only.

Here are 3 NetEnt online casino sites that feature Starburst and a host of other developers’ games. They are BetMGM, Golden Nugget, and BetRivers, the latter of which is the only casino with a mobile app exclusive to Android. Wherever you play, there are a few other NetEnt games like “Double Stacks” and “Butterfly Staxx,” as well as the progressive jackpot game “Mercy of the Gods” and more. The casinos mentioned above routinely have bonus offers for new players. So, keep an eye out for these offers, and always remember to read the terms and conditions before depositing with one.