I confirm, that I am over 21
7 players already played

There’s something for everyone here, including an excellent ‘Buy A Bonus’ option for those who don’t want to search for Scatters to open up the Free Games bonus round!

Take a step into the world of Princess Diana, also known as Wonder Woman, in this well-designed 5×4 video slot.

Those looking for a great free slots experience have the option of choosing to play the regular video slot version of this title or instantly buying the Free Games feature. With an awesome RTP between 95.84% and 96.92% and plenty of ways to win, your budget could stretch further on this slot than most others.

Wonder Woman Gold is clad with stunning graphics, including Wonder Woman herself, along with an ’80s themed soundtrack that suits the game perfectly.

How to Play the Wonder Woman Gold Slot – Rules, Features, and Payouts

What an action-packed slot Bally has in store for us here! Players will encounter Free Games, Expanding Wilds, Mystery Stacked Wheels, and three budget-boosting jackpots!

If that’s not enough, the slot features some beautifully illustrated graphics as well as a fitting soundtrack to really put you in Diana’s universe!

The Wonder Woman Gold Slot features 40 fixed pay lines that are played across a 5×4 video slot. Players can select a stake with denominations ranging from $0.50 to a whopping $200 a spin!

As the title suggests, the game is themed around Wonder Woman, with a beautiful gold aesthetic adorned with the Red, White, and Blue of the US flag. Players will hear classic music from the Wonder Woman TV show, and everything seems to fit perfectly. There aren’t any sharp sounds that may bug you after a while on this title.

Players have two playing options here. They can choose the regular slot machine experience and spin-to-win, or they can choose the ‘Buy a Feature’ option, in which they will bet a predetermined stake and immediately unlock the Free Games feature. More on that below!

A bunch is going on with this slot! Standard playing card symbols from Jack to Aces are coupled with various picture symbols. The top non-jackpot symbol is the Golden Diana, which offers players 3x their bet amount for five symbols.

The regular symbols in Wonder Woman are designed to give players a top-up during play. They are not intended to provide big wins.

The big wins come from features and jackpots! There are three jackpots players can look out for in the regular game. Players win a jackpot when matching jackpot symbols that appear on reels one and five. Even better, these jackpot symbols still present a regular symbol, so they don’t even take the space of a potential winning symbol on the reels. The three jackpots award players five, 50, or 500x their bet, respectively.

Players who are hunting for the excellent Free Games bonus in this slot will be looking for Golden Shield Scatter symbols. These Scatters can be found on reels one, three, and five, and players will need to find all three!

Expanding Wilds and Your Choice of Feature

Wonder Woman has some cool features lined up for players, too. The first and most common is the Expanding Wild feature, which may appear on all except the first reel. 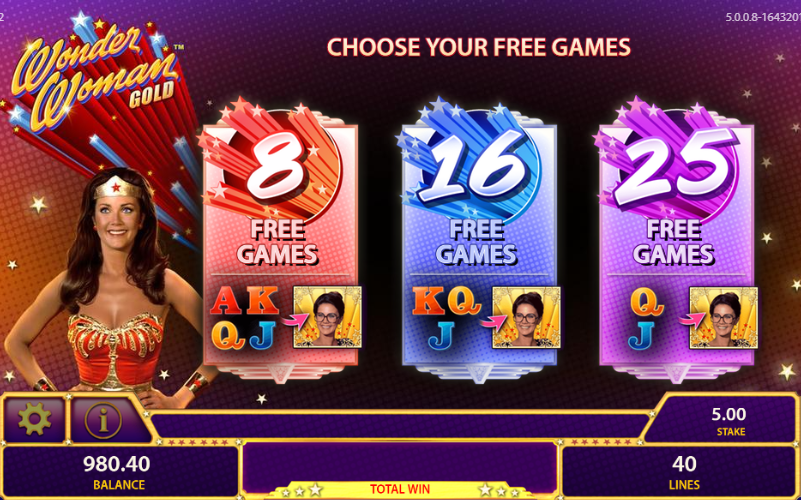 The Expanding Wild will expand vertically, covering four squares, and replacing every symbol apart from jackpots and Scatters. Please note that the Expanding Wild only expands if it facilitates a win.

The Free Games feature is triggered by finding three Scatter symbols or ‘Buying A Bonus.’

When triggered, players will be presented with three options and must choose between either eight, 16, or 25 Free Games. It might be tempting to take the 25 Free Games without a second thought, although there is a difference between them.

Each selection converts a different amount of symbols into Golden Diana symbols, which means you are likely to get more winnings per spin on the game with eight Free Games. Ultimately, it is up to you, though, as the RTP for each selection is very similar at around 96.92%!

Our Impression of Wonder Woman Gold Slot by Bally

We decided to play the Wonder Woman Gold slot in demo mode to give you an impression of the game. We played both the regular video slot version and tested out the ‘Buy A Bonus.’ Here’s how we got on.

To start the slot machine action, I set the stake to $5 and began spinning. My goal here was to see what our balance looked like after 50 spins. Theoretically, we could end up $250 down.

Fifty spins later, without hitting any significant wins, save a single $32 payout, we were unfortunately down $163 after spinning at five dollars a turn. So let’s see how we fare when we buy the feature.

Technically speaking, buying the bonus has an RTP about 1% higher than the actual slot. 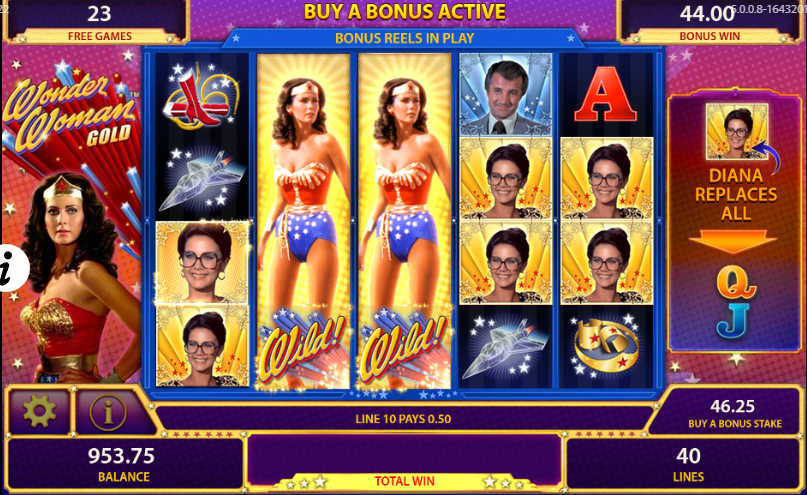 The final bonus, with 25 Free Games, was the biggest of the lot, with a tasty $88.30 win. That was primarily due to a fantastic win at the beginning of the feature, thanks to two well-placed Expanding Wilds.

This is a top slot. Everything from the stunning graphics and soundtrack to the attractive RTP of up to 96.92% makes this game really worthwhile.

Looking for the best odds in online slots? Check out our list of the highest paying slot machines.

The fact that players who enjoy features can simply buy the feature and get straight into action-packed Free Games with the click of a button is a rarity.

Those who like to spin the regular slot have lots to aim for, with Expanding Wilds creating lots of little wins and the potential of winning the 500x jackpot with every spin!