Invaders from the Planet Moolah Slot by WMS

I confirm, that I am over 21
3 players already played

An amusing alien-invasion-themed slot that can see players winning multiple times per spin through Cascading Reels to trigger The Invasion feature, where up to 50 spins can be won!

Players will witness five hilarious cows abducting all winning symbols in this slot, which are replaced with fresh symbols, giving players plenty of chances to win Free Spins and collect even more moolah.

Play Invaders from the Planet Moolah for Real Money

Those looking to blast barnyard objects with UFOs piloted by cows are in luck. Yep, you read that right! In Invaders from the Planet Moolah, you’ll go in search of riches via alien invasion. Players will use cascading reels in the hopes of triggering tons of Free Spins and additional wins through The Invasion feature.

Those who don’t trigger the invasion may still be in luck, though, thanks to a jackpot with a maximum win of 750x the bet amount! In fact, the cows are so eager to earn their moolah there is a chance to trigger the feature on every spin, regardless of meeting the normal conditions!

Read on to find out more about this game, including where you can play it and other similar free slots!

How to Play Invaders from the Planet Moolah Slot – Rules, Features, and Payouts

Those searching for moolah should understand the rules before they start spinning. Invaders from the Planet Moolah isn’t a difficult slot to understand. Nevertheless, it does have some interesting mechanics and features, so players may get more enjoyment out of the game when they know exactly what’s going on!

Invaders from the Planet Moolah is a 5×3 video slot with 25 fixed pay lines. Players can make bets anywhere from $0.25 to $125 per bet, which is the only adjustment available in the game. 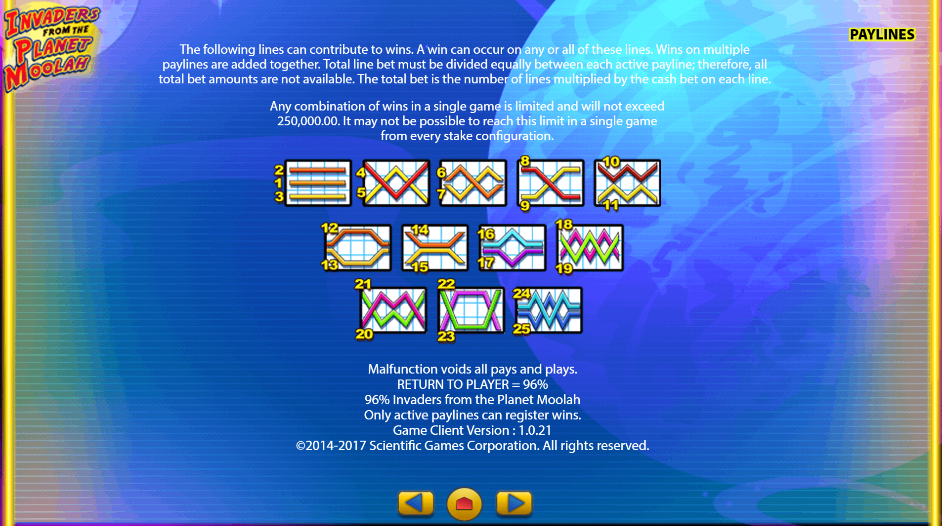 This slot has a really interesting theme: A barnyard that’s undergoing an invasion by alien cows! The game’s backdrop features various planets, cows in flying saucers, and an outlandish overall sci-fi feeling. The sound of lasers, spaceships, strange noises, and cows mooing will help transport you further into the theme of the game.

Invaders from the Planet Moolah offers players an experience with medium volatility, meaning there is medium risk vs. reward. Players may expect an RTP of around 96%. If you’re looking for high return-to-player (RTP) slots, you can check out our list of the highest RTP slots available.

The WILD cow symbol can appear on any reel but the first and substitutes for any symbol on the board.

All symbols from the ‘mixed’ category, that is, all the character face symbols, count as one single symbol for winning purposes, opening up many possibilities for wins.

Each other symbol has its own value, which can be found in the pay tables below. Bear in mind these payouts are for the minimum bet of 0.01 per line, and so a win of 7.5 is actually a win of 750x the bet line. Players must bet a fixed number of 25 lines per spin, so the effective minimum bet is 0.25.

Thanks to the versatility of the mixed character symbols and the nature of the Cascading Reels, Invaders from the Planet Moolah sees players winning time after time.

It’s worth noting that win amounts are on the lower side, and as this is a medium volatility slot, players should be looking to activate the feature to see huge returns.

As a Cascading Reels slot, any winning symbols will be removed from the reels in excellent fashion, thanks to our army of five UFOs piloted by cows above the reels. 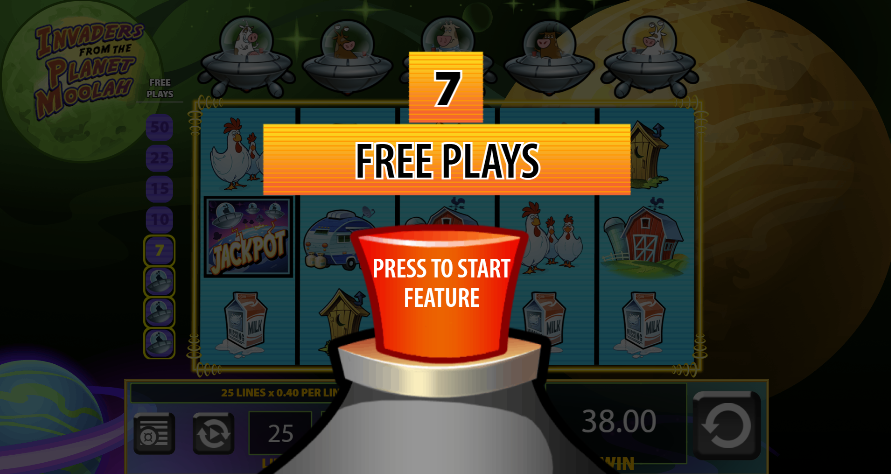 The free spaces cleared by the cows are then repopulated as pieces fall, making way for new ones. Each time a player wins, they work towards launching The Invasion feature.

The main goal for players is to trigger The Invasion feature in this slot. An Invasion is started when players win four or more cascading wins on a single spin.

Each additional win increases the number of spins up to a limit of 50. Although there is no multiplier feature to speak of, players can also win more Free Spins during the Free Spins round!

The Invasion feature can also be triggered randomly at the end of a spin that would not usually trigger the feature.

Our Impression of Invaders from the Planet Moolah Slot by WMS

To give you a better understanding of the game, I played through two sessions to see how my balance looked after and explain how I managed to trigger the game’s feature twice.

In the first session, I decided that I would set the stake to $2.50 and play until I either spent a budget of $100 or hit The Invasion feature.

After around 50 spins, my balance was about $70 down, showing that although I was losing, the smaller wins kept my balance from being obliterated, and I kept going. What came as a surprise, though, was that in this session, the first time triggering The Invasion wasn’t just the base of seven free spins; it was a whopping 25 free spins alongside an initial win of $34!

However, The Invasion wasn’t as lucrative as usual, and we took home just $46 from our 25 Free Spins. I still cashed out from this session $9 up, though! 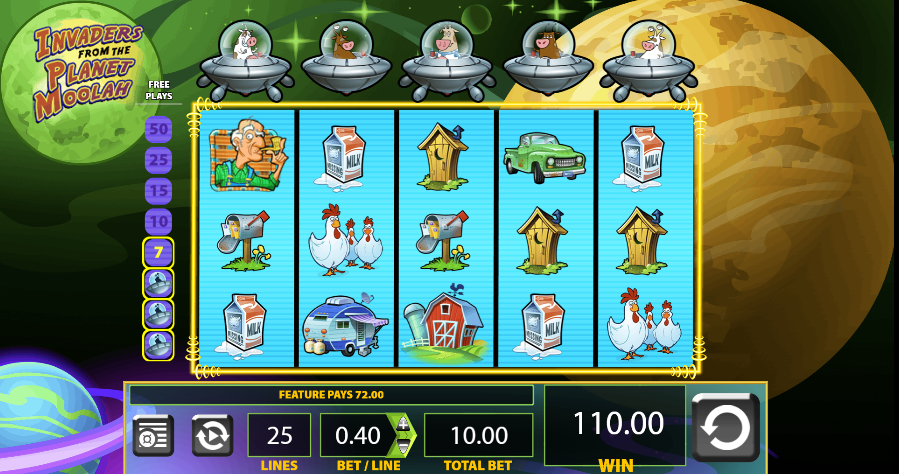 In my second session, I decided to up the ante to $10 per spin!

I hit the feature after just four spins here, and the total earnings from the initial spin and the winnings from the seven Free Spins came to $110. Not bad!

Now I was up, I lowered the bet to $5 and kept going. I wanted one more good win before cashing out here.

However, after around 50 more spins, we were about $45 down, and I decided to call it a day there.

Summary of the Invaders from Planet Moolah Slot Review

We had a fun time playing this game. The Invasion feature is incredibly valuable, and the fact it can be triggered even without winning on four consecutive cascading reels is even better!

The game’s RTP of 96% is also pretty good and, coupled with lots of little wins, ensures your budget remains healthy for a while. Hitting the feature isn’t as difficult as you might think!

That said, dry streaks can happen, and I believe when players hit it big and have a balance they are happy with, they should stop or find another slot that has lower volatility!