Online Casinos in Michigan Had Their Third-best Month in August

According to data issued by the Michigan Gaming Control Board on September 20, after a bump in July, Michigan legal online casinos shouted, “Hold my drink,” and gave the operators $130.9 million in gross receipts.

This April’s $132.4 million and March’s $131.6 million totals were higher in Michigan’s online casino history, making that number the third-highest in the state’s history.

With $49.3 million in revenues, BetMGM had its second-best month ever, coming in second behind $49.8 million in April.

The race for second and third place is as tight as it has ever been, with DraftKings just hanging on to second place over FanDuel for the second consecutive month. FanDuel fell short, earning $19.32 million in August, while DraftKings earned $19.36 million.

BetRivers came in fourth with $9 million, and Golden Nugget moved to the fifth spot with $7.2 million, up from $6.1 million in July. Caesars, with a $5.9 million month, went down to the sixth spot.

TwinSpires, which has already exited the market, will only be reporting its revenues for the first week of September next month.

Online casinos paid $24.2 million in state taxes for the month of September, as well as $6.3 million to Detroit and another $2.9 million to the tribal operators. 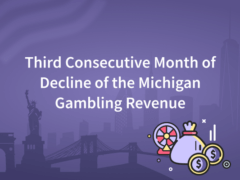